There is something to be said about an artist and the space they choose to inhabit and create. I have been reading "Where Inspiration Lives" edited by John Miller and Aaron Kenedi. This book is about writers, artists, and their creative places. I am going through a living transformation of my own.

I was born and raised in Sacramento, CA. I lived in the same bedroom from birth until I left the nest for college at the age of 18. Since I started college I have moved seven times. I lived on my campus, which is former Fort Ord for five years hopping from barrack to barrack.

I was on the train one day and sat next to a nice gentleman and we got to talking. He and I had something in common. We both lived on Fort Ord. His experience was much different then mine, but it was a connection that I had with him that I had not had with most other people I had met. We were able to talk about the view and the grassy hills that the barracks, which are now college dorms, sit on top of looking out to Monterey Bay and all its Cypress glory.

Since graduation, I have been living on the outskirts of former Fort Ord. Never veering too far from the ocean. As you and I both know I feed off the ocean and the inspiration it gives me for a large portion of my body of work as an artist.

This book, "Where Inspiration Lives" discusses about a few artists and their connections to their surroundings. Artist Richard Diebenkorn, moved to Ocean Park in 1966 from Berkeley CA. Out of this move he had a studio with light that had him inspired in a way like nothing before. This is when he created his Ocean Park series. Georgia O'Keeffe took a trip to Abiquiu, New Mexico in 1929 and went for a hike in the area and found dilapidated buildings known as Ghost Town. She would travel back there multiple times, made it her other home and she created some of her most profound work there. Here is a excerpt from a letter she wrote to Anita Pollitzer in 1916,

"Tonight I walked into the sunset to mail some letters and the whole sky--there is just so much of it here--was just blazing and grey blue clouds were rioting all through the hotness of it ... I walked out past the last house, past the locust tree and sat on the fence for a long time, looking, just looking into the lightning. You see there was nothing but sky ... there was a wonderful moon... It is absurd the way I love this country. ...And the sky, Anita, you have never seen such sky. It is wonderful."

The book discusses about Peter Matthiessen in Sagaponack, Larry McMurtry in Archer City, Anne Rice in New Orleans, Gary Snyder in Kitkitdizze, Terry Millan in the East Bay, Eudora Welty in Jackson, Henry Miller in Big Sur, and Henry David Thoreau at Walden Pond. You see for every artist a place of inspiration is different. Some artists travel far and wide to be inspired and have interactions with people all over the world. Other artists may live in the same area for their whole life. Every artist is different and how they capture inspiration to produce their work.

Here is an photograph of my old space from my front door. I would hear people walking the streets at varies times of the day and night. This street is the main street for the emergency transportation, so sirens are an everyday occurrence and I too would hear that noise at varies times of the day and night. The one saving grace was that I lived so close to the ocean, so when times got hard I would go to the sea and just let myself feel the water hear the crashing waves and smell that rotting kelp. 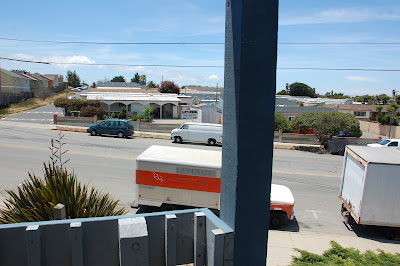 I have learned to befriend Change. Change is a different creature than my friend Art. Change seems to show up when ever she feels like it. Change is not always nice and pleasant but when I let Change do what she wants, wow, she takes me to the coolest places I never imagined. So here is change working her magic on me. This is the current view from my new door step. Im out looking Steinbeck country, which is great because Im gearing up to create work for the National Steinbeck Center with the Octopi Collective's exhibition in August. I'll let Change and Art hang out together over the next several weeks and see what they do. As for me? Well, I will be in production mode. I just hope Change makes a sweeter mocha than Art. 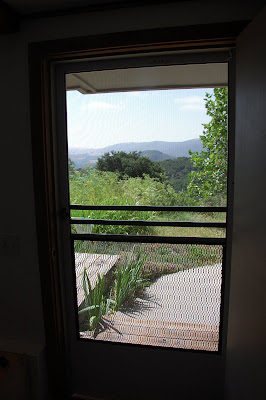 O I cant let you go without you seeing this super rad beetle I found as I was walking up my wooden stairs. A-MAZING! 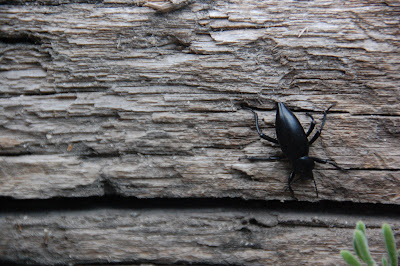 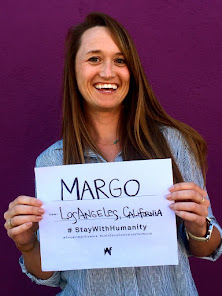